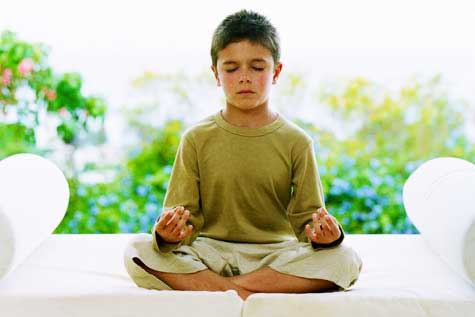 After talking with a friend whose kindergartener was learning meditation at school, I was inspired to try this at home with my 8-year-old and 5-year-old.   Even though I’ve been working on a meditation practice for nearly 20 years, it hadn’t dawned on me to teach my kids this invaluable skill.  I always believed that the power of my practice was that it made me more centered and clear, which then translated to me being a more mindful mother.

Even though the idea of teaching my kids to meditate was novel, I decided it was worth a try.

I collected my zen timer on my iphone and rounded up my boys.  We practiced about 5 minutes of yoga first, and then sat for 2 minutes of meditation.  During our first session, my 5-year-old Jack crawled around barking and panting like a dog while my 8-year-old Pieter burst out in spontaneous giggles everytime Jack brushed up against him.  I sat and mindfully (and joyfully) took in the moment.

Our next sessions were repeats of the first, with slight variation (Jack as superhero, Jack as chicken, Jack as Boeing 747).   One night my yoga teacher was at our house for dinner, and joined in our practice.  She and I were still talking and laughing at Jack’s antics when the first meditation bell rang (this particular evening Jack was naked).  When the bell rang again 2 minutes later, Pieter opened his eyes and announced “I won, I won!  Everyone else made noise but I was still and quiet the entire time”. This is now the game….who can be most still and quiet.  And Pieter usually has it figured out “who won” by the end of our session.  Part of me wanted to teach the lesson “this isn’t a contest, there is no winner”, but I didn’t.  Because Pieter is correct….we do win, we do gain something, we do come out ahead every time we get quiet and sit still.

As our day winds down, I quietly smile when I hear the words “Mom, we have to do our yoga and meditate”.  Maybe next month we’ll try 3 minutes.